The inspiration for the above animation was driven by handcrafted quill type. If you Google “paper quill type” you’ll see samples and it’s quite amazing. Before the animation was conceived I first tried my hand at making a static rendering. I made the 2d shapes in Illustrator and then brought them into Cinema 4D to create the extruded 3D renderings. The “O” was my first attempt:

Then I realized I could substitute the “quillish” forms for something different. The “a” was born from this: 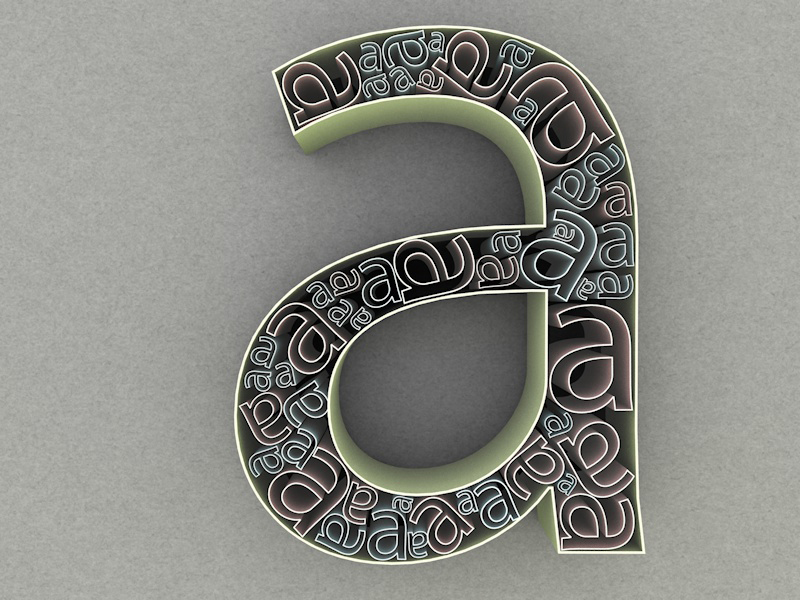 Below is a demonstration of me creating 3D type from start to finish. I present the letter “P”:

I got to thinking about how these shapes would make for a fantastic animation. The initial thought was to simply animate what I had already modeled and textured, but I didn’t want the type to just draw out, I wanted to have some layered look happening in which the viewer would see an initial drawing of the path followed by the final stroke which would have a different look. I started with the same textures used in the above still renderings but had a tough time finding a material for the first brush stroke. After playing for a bit I settled on glass. Clear glass for the leading strokes followed by a second glass stroke with a tint applied to it. Below is my layered glass material test:

RENDERING & POST-PRODUCTION
I knew once I decided to go with two layers of glass that this sucker was going to be a rendering beast. This little project has all the items that typically bring render engines to a slow crawl: Global Illumination, Depth of Field, Reflection, Refraction, Transparency and almost 2,000 frames to render. After spending days tweaking Cinema 4Ds new R15 GI settings I finally found something that I could live with that looked decent, but didn’t take three months to render.
The music is from freestockmusic.com which has a decent size selection of great music tracks. The final post-production was done in After Effects  and eventually outputted to a Quicktime file.

I’m running a bit behind this holiday season, but after much procrastination, here is the behind the scenes production of this years Christmas Card.

In this video I will share an experiment I have been exploring in Adobe Illustrator trying to make isometric illustrations using the 3-D “extrude and bevel” effect.

I’ve been using a free app called Video Monkey for a few years now. Video Monkey is a video encoding application for Mac OSX and it does an excellent job at transcoding media files. I usually use it as my final deliverable render, meaning it does the last encoding pass before I send the video…

About one year ago I tried my hand at the Daily Logo Challenge. My approach (which you can read about here!) was to create 3d renderings from my sketches. After I started building the first few designs I realized that, if given the time, I could also animate the designs in a fun and whimsical…

I’ve always felt that shape and form were powerful design elements. This most likely entered my conscience by looking through a camera lens and also by viewing the photographic works of Paul Strand. Years later I was reintroduced to this topic while viewing the design work of Malcom Grear who throughout his career mastered the…

The early 2000’s were the dark ages of online print services. I tried a bunch of them: Apple, Ofoto, CafePress and probably a few others that are no longer around. They all had one thing in common… the prints were not very good.  Then I stumbled upon an Mpix.com advertisement  while thumbing through a photography magazine…